Global sovereign currencies are regulated and mediated by central banks, with significant tracking and infrastructure capabilities to allow for secure currency transactions, to enforce government policy, and to monitor criminal behavior. These safeguards do not exist with cryptocurrencies, which enable peer-to-peer instantaneous and immutable blockchain transactions. The result: participants can sidestep American controlled transaction mechanisms. Non-state actors can fund illegal operations, state adversaries can evade sanctions, and near-peers can weaken the power of the US Dollar globally. While broad-range challenges to the Western financial system will not happen overnight, America’s near-peer adversaries are testing new ways – like using digital currency – to circumvent the status quo. The US can and should respond by shutting down those tests where it can and by promoting innovation at home.

Venezuelan dictator Nicolas Maduro is the first to attempt using cryptocurrency to avoid the traditional financial infrastructure at the state level. He launched the Petro (₽), an oil backed cryptocurrency, in 2018. Some economists and crypto experts dismissed the development of the Petro when it was originally launched. While Maduro fumbled the Petro initial coin offering (ICO) launch, do not mistake his missteps as evidence that his use of crypto is just a one-off attempt to scam unwitting investors. Venezuela’s creation of the Petro, its formation of a national cryptocurrency exchange, and its legalization and nationalization of crypto-mining are part of an imminent international effort to evade US sanctions using digital currency. Countries that support Venezuela, in particular Russia, contributed to building this infrastructure and see it as a prototype for designing a similar national crypto financial infrastructure in the future.

President Maduro made it clear from the start that he plans to use cryptocurrency to evade US sanctions, saying he created the Petro to “take on Superman.” While the initial roll-out of the Petro faced setbacks and challenges, its development and use must be contextualized within a larger economic infrastructure to survive sanctions.

The Petro was ridiculed and dismissed by many after it was launched. Economist Steven Hanke, for example, said, “it doesn’t exist. The whole thing is a sham, a fraud… a public relations thing.” Bloomberg called it a scam. Looking at the Petro’s initial development and launch into the market, this derision makes sense: Maduro announced the creation of the Petro on December 3, 2017, promising that it would be backed by oil, gas, and mineral reserves, but the Petro white paper and website peg the Petro to one oil barrel, which is defined by the Venezuelan Ministry of Oil. The English and Spanish versions of the Petro whitepaper listed different blockchains the Petro would operate on. And, finally, it is still unclear whether the Petro’s pre-sale — which lasted from late February to late March 2018 – actually raised any money.

Still, in 2018 the Maduro regime was just starting to put the pieces together for a larger crypto-financial infrastructure to evade sanctions. The regime established the Venezuelan Initiative for Blockchain Economics with Carlos Vargas as their “Superintendent” and in August 2018 replaced the bolivar fuerte with the bolival soberano, which was given a fixed exchange rate to the Petro of 3,600:1. The Petro also retained its 1:1 rate with barrels of Venezuelan oil.

Last month, the Maduro regime revealed the next stage of this infrastructure – a regulated, national, decentralized crypto exchange. Built on the Ethereum blockchain the new BDVE exchange enables investors to trade traditional stocks and assets in their digital, tokenized form. Decentralized exchanges (DEX) like BDVE allow for the creation of peer-to-peer markets directly on the blockchain. Traders independently store and use funds, and make transactions directly with one another, without any involvement from the exchange itself.

The BDVE exchange is part of a rebranded Pi ecosystem. PiMarkets, PiToken, PiExchange, PiMoney, PiCasino, and PiChain are all decentralized cryptocurrency tools. Its developers, Guillermo Pérez Alba, Manuel Fajardo García, Johan Sosa Salazar, and Carlos García Navarro worked on other projects for Maduro, including Interbanex Foreign Exchange, which offered its users the opportunity to trade foreign currency through private banks.

Ironically, Venezuela’s state-sponsored crypto application uses American IT for its infrastructure. Its exchange documentation—like the whitepaper, user manual and more—are stored on Amazon’s servers. The BDVE application Pi Markets—which says it “connects the user with the Decentralized System of Encrypted Markets”—is already available on Google Play. Finally, on October 20 2020, according to a document posted in the Pi Crypto Telegram group, they rolled out the beta version of the Pi Markets app in the Apple App Store. It is not yet approved, but one can request a beta version for testing already.

Venezuela also legalized crypto-mining and created a national mining pool. The Venezuelan government was already mining behind the scenes - they would frequently seize mining equipment from local miners and keep the equipment running.

Venezuela can now interact with trading partners instantly and globally without touching US-controlled payment rails, they have a nationalized crypto mining operation to generate additional wealth leveraging all miners in their country, and they were helped by the Russian government every step of the way.

Russia’s Contribution to the Development of Venezuelan Crypto-Financial Infrastructure

The Maduro regime’s approach to cryptocurrency is largely based on their underground gold economy. Venezuela has been selling gold to evade US sanctions for years. The Venezuelan military transports gold bars to the Central Bank of Venezuela where it is sold internationally through Russian, Iranian, and other international partners.

Seven months before OFAC began to close in on some of Venezuela’s gold mining operations, Maduro was readying his cryptocurrency launch. Digital gold is the new gold – and Maduro turned to the same people to help with former that he had used with the latter. Two Russian businessmen even attended the Petro launch, Denis Druzhkov and Fedor Bogorodsky. Bogorodsky is a co-owner of a shell company called Aero Trading, which was in charge of implementing tech for the Petro. He gave a speech congratulating Maduro on a “very risky but timely move.” 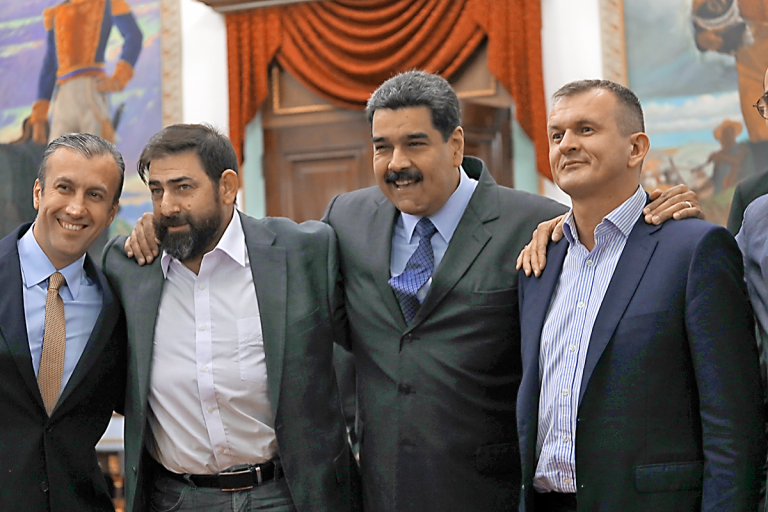 Denis Druzhkov, a Russian-born US citizen, is the former CEO of the “Zeus Exchange,” a Singapore-based hybrid cryptocurrency exchange operating on traditional financial and digital markets. Druzhkov isn’t new to US regulators. In October 2014, he was fined $30,000 and barred for three years by the Chicago Mercantile Exchange for fraudulent trading in futures’ contracts. Another co-founder is Russian industrialist Sergei Litvin, who is a board member of a sanctioned Russian company called Stroytransgaz, controlled by Gennady Timchenko, who is also under US sanctions. 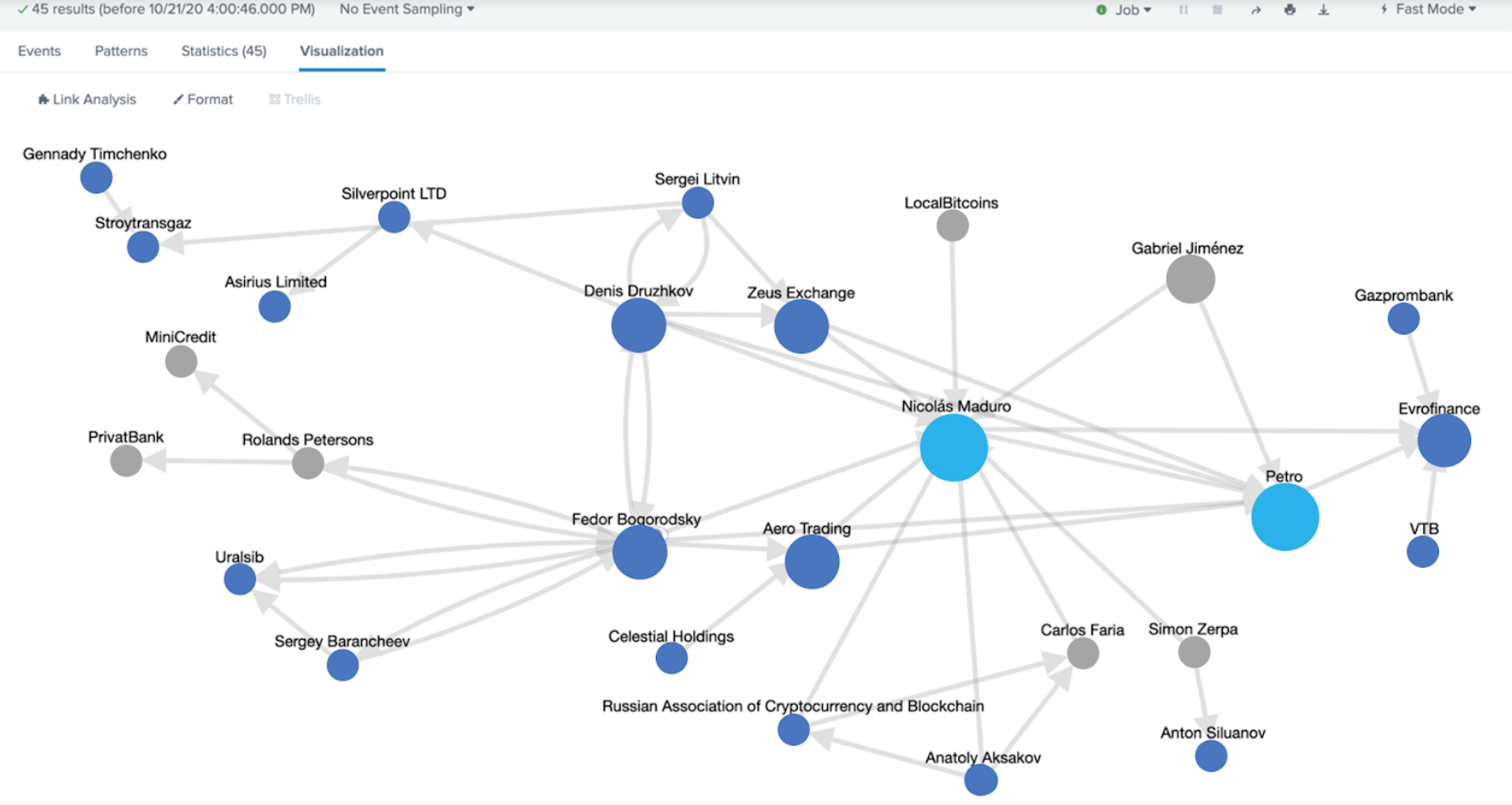 The connection to Russia became more apparent on February 21 2018 when Maduro’s Minister of Finance, Simon Zerpa, went to Moscow to brief his Russian counterpart, Anton Siluanov, on the progress of the Petro. ‘We deliver to Min. Siluanov updated information about our cryptocurrency', the Venezuelan minister wrote on his Twitter account.

The biggest contributors to the Petro project of Russian origin. Source: NTerminal

When using an early version of the Petro’s wallet, investors could see a link to a Venezuelan government account at Evrofinance—a Russian commercial bank—where users could send money in order to buy Petro. Venezuela’s government purchased a 49 percent stake in Evrofinance in 2011, making the bank, which traces its history back a century as a Western financial outpost for the Soviet Union, a vehicle for binational trade and investment projects. Other shares are held by Gazprombank and VTB, which have been under US sanctions since 2014. This created an early fiat to crypto on-ramp for international investors, very similar to what Coinbase did for Bitcoin users in the United States. Even with the support of the traditional banking sector, the Petro still struggled to list on any global crypto exchanges. To combat this, Maduro built additional crypto infrastructure.

The Venezuelan government has prototyped and released all of the essential elements of a modern crypto-financial infrastructure: a state controlled digital currency, mining pools, on and off ramps to traditional banking, and digital wallets. They have built a minimum viable product that will allow them to interact with trading partners instantly and globally, without touching US-controlled payment rails.

Further, Russia’s work with the Maduro regime is more than just an effort to prop up a dictatorial regime within their orbit—they view it as a pilot project. Parts of the Venezuela project will inevitably be reused by Russia and others in the coming years. While the US and Europe seek to impose and extend sanctions against Russia for their chemical weapons program, poisoning opposition leaders, and preventing the Russia-led gas pipeline project Nord Stream 2, Russia has begun to test a digital Ruble.

To date, Venezuela’s crypto-financial infrastructure is still immature and has not yet been used in any significant way to move large amounts of funds. America – though - is at a critical juncture where a regional experiment might soon become international. Especially if digital currency scales at the rate experts like Paul Tudor Jones and Stan Druckenmiller suggest it might. As our traditional financial system faces its most dire challenge in decades, our adversaries are using cutting edge fintech and our own IT to build an MVP to challenge our rules based infrastructure. It’s time to take digital currency seriously before it is too late.