Steemit Inc was recently acquired by Justin Sun, the founder of TRON. Following the acquisition, there seemed to be mixed support from within the Steem ecosystem, but positive response from the TRON community. Many argue that this move would help Steem expand marketing efforts and bring new users on to the various Steem-backed platforms.

A large percentage of the STEEM & STEEM POWER assets were held by Steemit Inc at the time of Sun’s acquisition, most of which came from the coin’s pre-mine (called the “ninja-mined stake”). This now became controlled by Justin Sun, even though the funds were said to be used only for decentralizing and developing the ecosystem.

The Steem community initiated a soft fork (Soft Fork 22.2) to limit the voting influence which Sun would have. In a post by Steem Witness @ats-witness, the motives for the fork are explained as reducing risk to the community from a single entity controlling a major stake in the asset. The post makes it clear that it is not that the community doesn’t trust Justin Sun, but rather that any entity should not have this centralizing power:

“In fact, the risk remained even if it was never relinquished because there were no on-chain actions taken by Steemit Inc. to decline their voting rights or remove/reallocate the stake even though the options were available…

Following Soft Fork 22.2, TRON announced in a post that this fork was “was maliciously structured” and “may be deemed illegal and criminal.” Essentially, by exercising the exact power which the fork was trying to mitigate, the TRON Foundation moved to vote in their own new Witnesses to take over voting power and “usher in new policies.”

While there were also supporters of Justin Sun coming on board, this is clearly not what many members of the existing community wanted. Here is the top comment on that post: 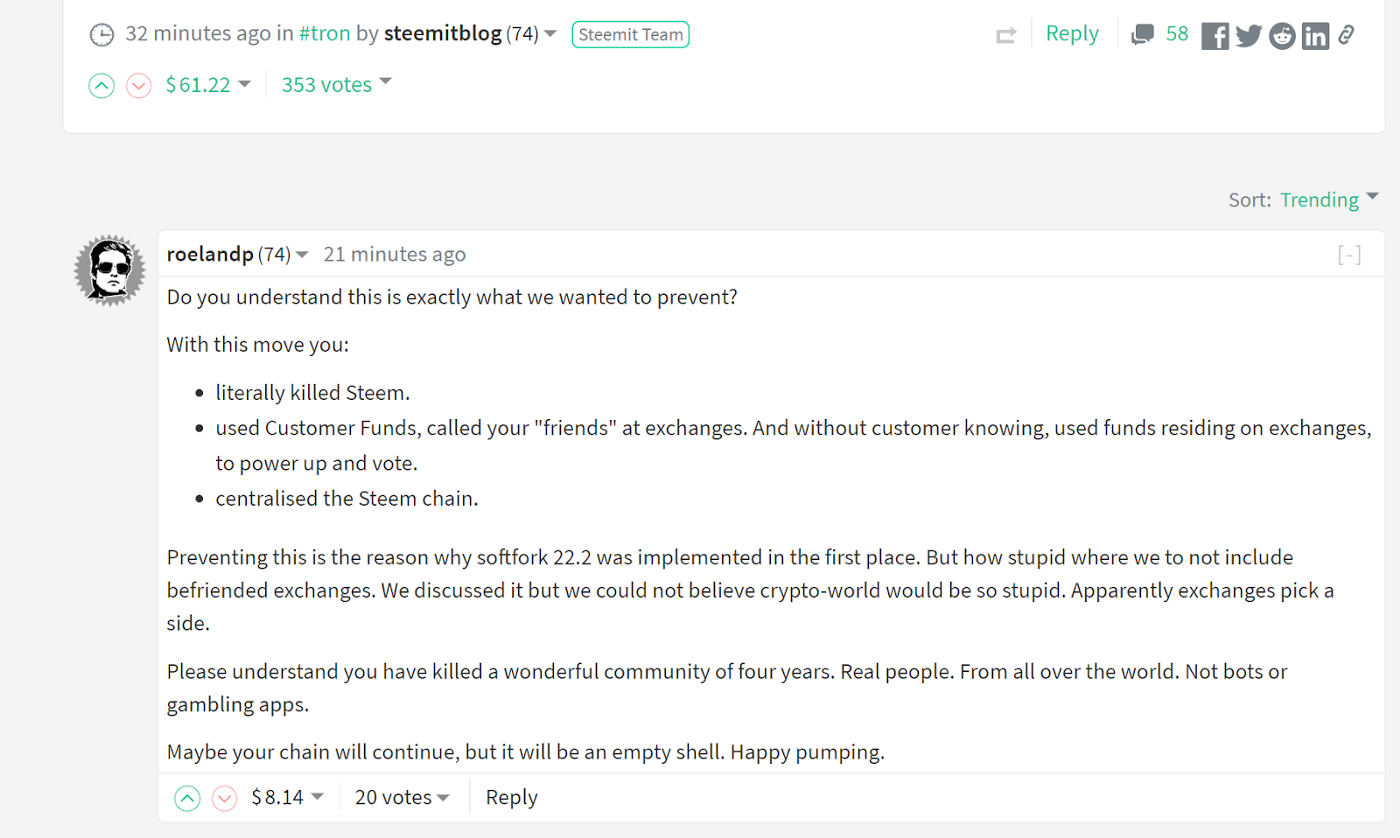 Ned Scott, the founder and former CEO of Steem Inc, came to Justin’s Defence — but has also received backlash: 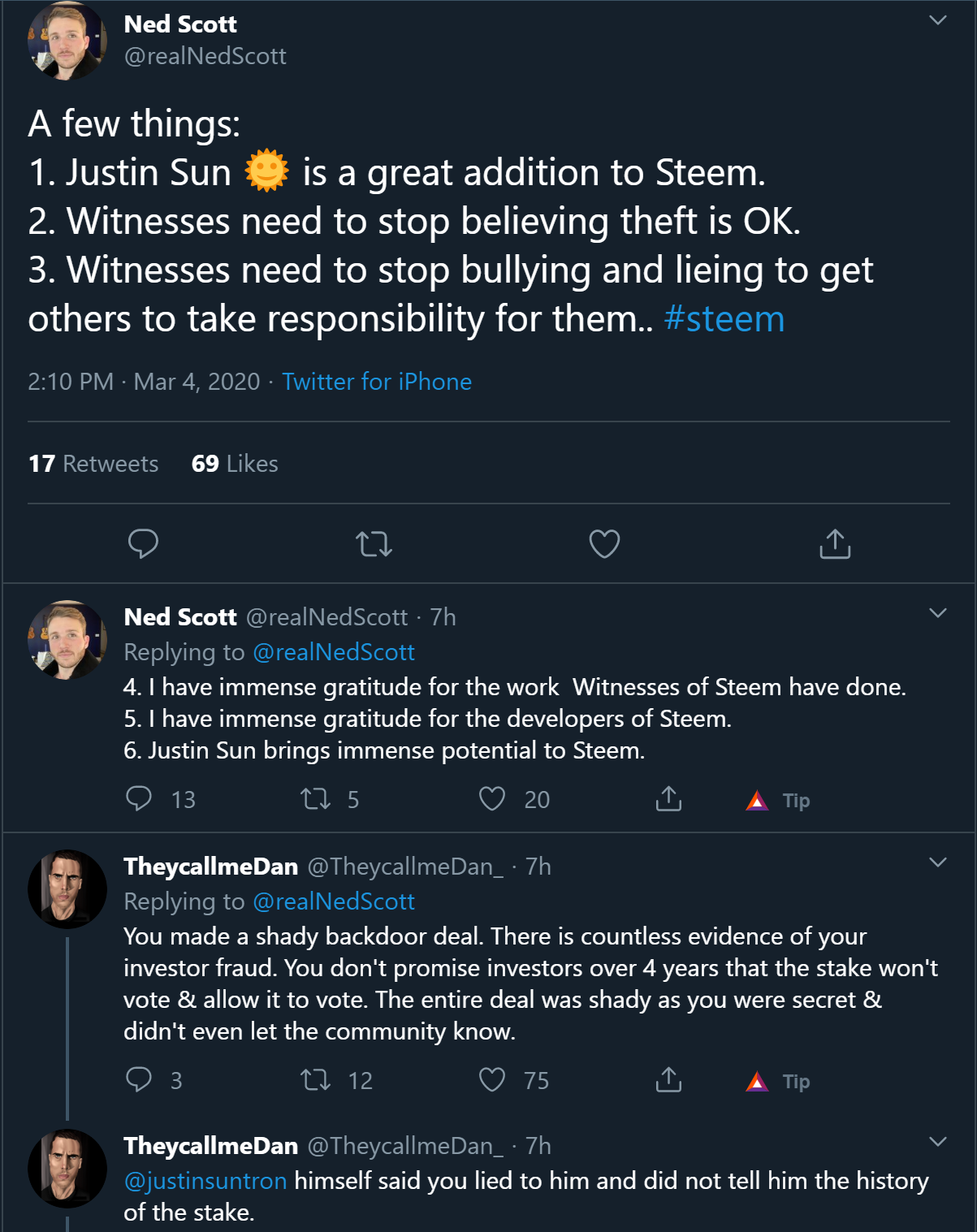 The combined voting power of the TRON Foundation coordinating with the well known exchanges Poloniex, Huobi, and Binance to use user funds to vote in their own Witnesses can be found here. Notice how all of the newly voted Witnesses have less than 100 individual votes: 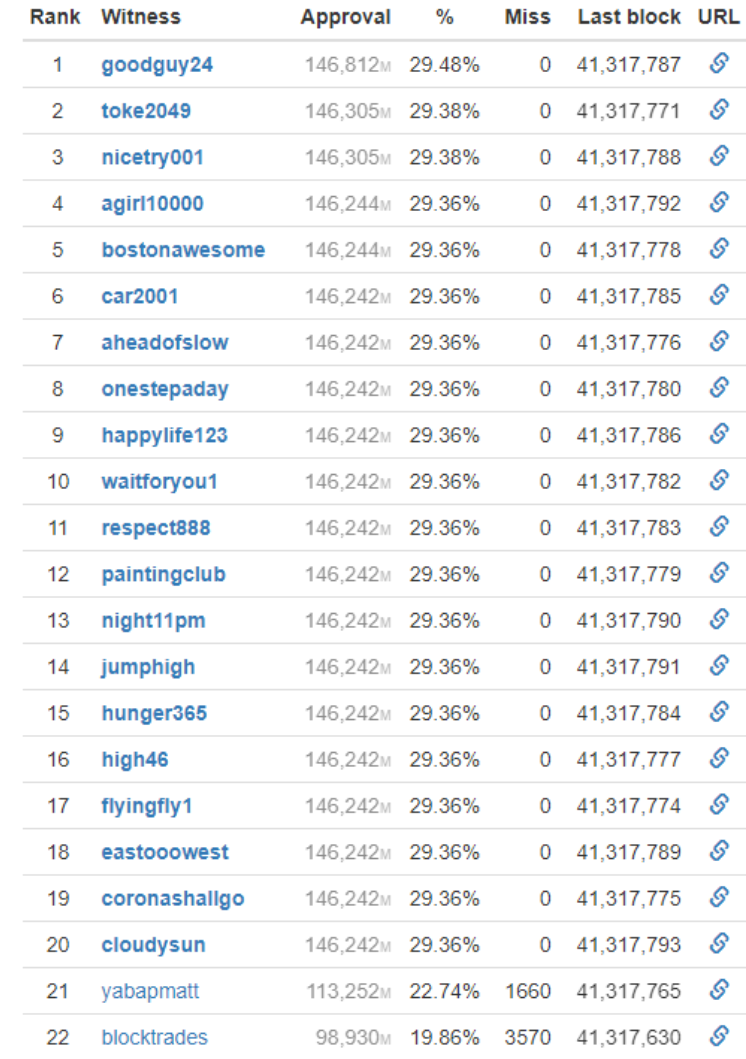 Sources claim that the exchanges mentioned were using their customer’s funds which they had custody over to make political actions on-chain.

“Early March 2nd, 2020 the exchange Poloniex.com began a process of embezzlement of an unknown number of user accounts funds. The funds, primarily a crypto currency called STEEM were loaded into the Poloniex account, with the amount embezzled equalling roughly 2,283,437.60 STEEM, which was locked away in a manner making it impossible for users to access their funds for trading or withdrawal from the exchange. This was done by locking up the STEEM by converting it into a form called STEEM Power (SP) which can be used to vote on things or gain influence within the STEEM blockchain.”

“This is an unprecedented attack. Exchanges working together to use customer deposits (in a DPoS system) to influence the blockchain governance.”

This started getting picked up by mainstream news outlets. Causing a PR nightmare for the exchanges associated:

“Justin Sun has seized control of the Steem blockchain — with the apparent help of several prominent crypto exchanges.”

“In short, exchanges have staked STEEM they controlled (seemingly from user accounts) to “vote” for new leadership.”

Following all of the negative buzz, the exchanges Huobi and Binance withdraw their support for TRON Witnesses. Now we can see non-TRON supported Witnesses rising back up the ranks: 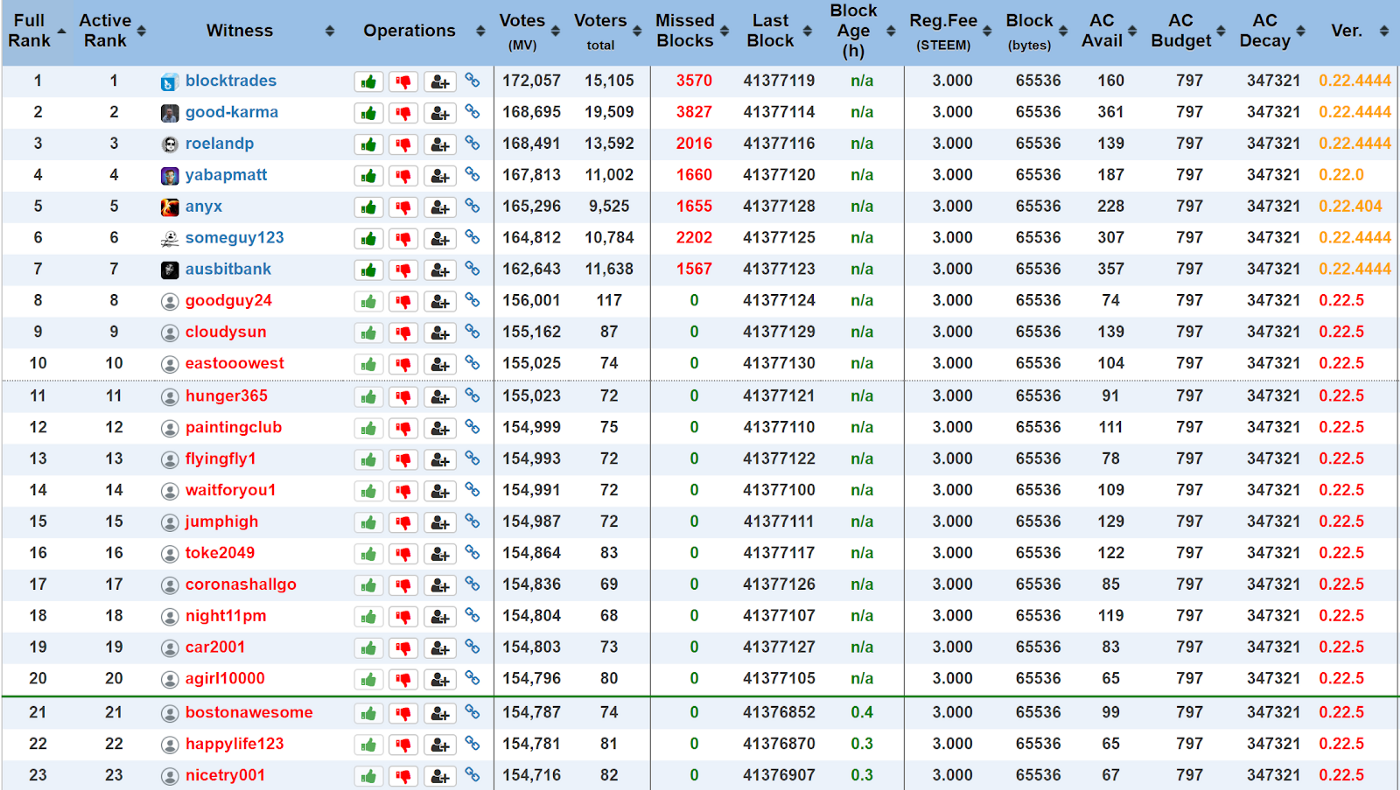 Using Nakamoto Terminal (NTerminal) data in Splunk enterprise, we can take a closer look at these events. Please first read my post, Introduction to Nakamoto Terminal, where I outline our cryptofinancial data aggregation & analytics platform. 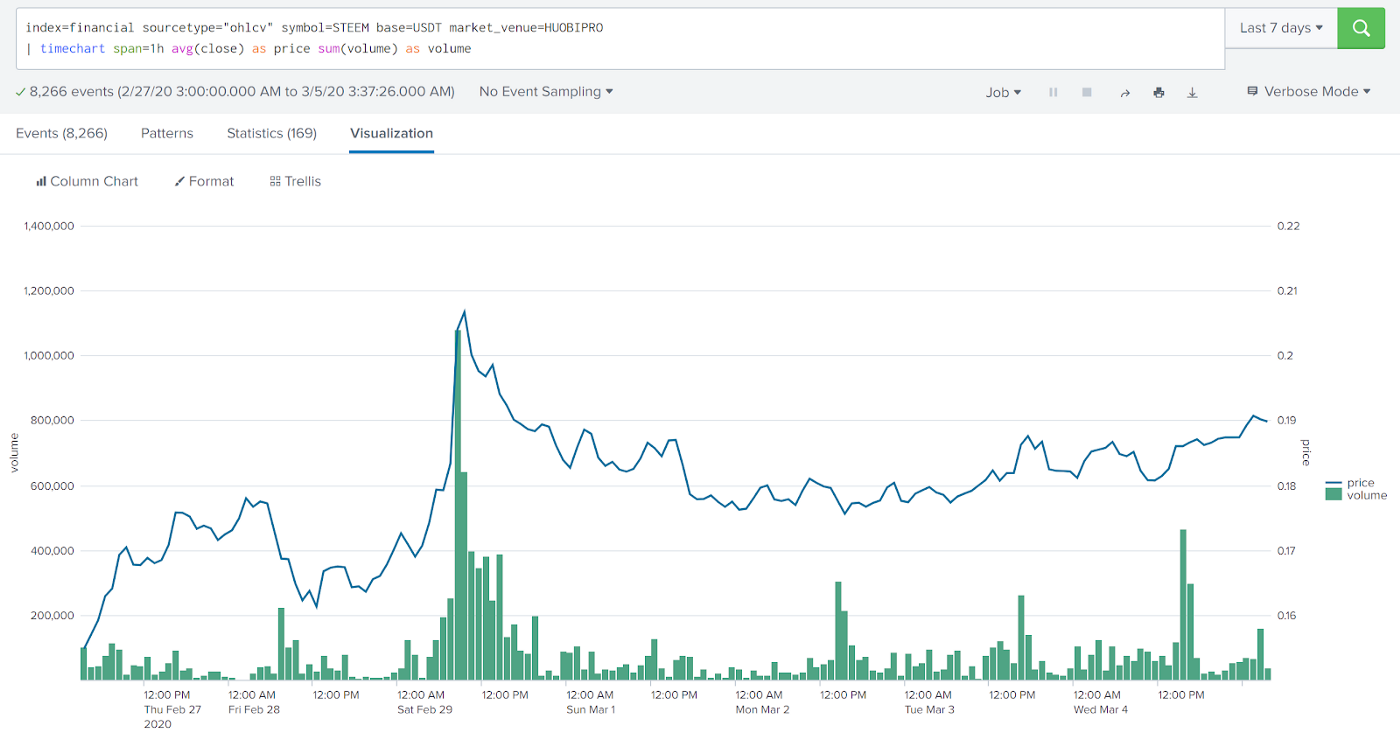 We see, on average, an increase in nlp mentions of each of these entities and a slight decline in sentiment:

Simply adding the word “steem” to our search for nlp event, we see that these entities weren’t mentioned together much at all before March 1st:

Director of Research and Development at Inca Digital