China’s Digital Currency Electronic Payment (DCEP), also known as Digital Yuan, e-CNY, and Digital RMB, is a form of centralized CBDC designed to replace cash in circulation as well as streamline cross-border payments. Far along in its development process, it already features comprehensive regulation and sophisticated pilot projects involving major Chinese banks and internet giants. As of November 2020, these pilot projects already exceeded $300M exchanged in 4 million transactions. The DCEP initiative is fueled by China’s concern over US Dollar dominance, the Belt and Road Initiative, and the upcoming 2022 Winter Olympics in Beijing.

Combining all the technological advances, legislation efforts, and other blockchain initiatives, China is exemplifying a balanced and systemic approach to the development of a CBDC. Although Chinese CBDC project still needs to prove its viability outside of the government sandbox, People’s Bank of China (PBoC) is well on track to have a fully functioning system by the 2022 Winter Olympics in Beijing. It even aims to enable foreign visitors and athletes to use DCEP at the event. 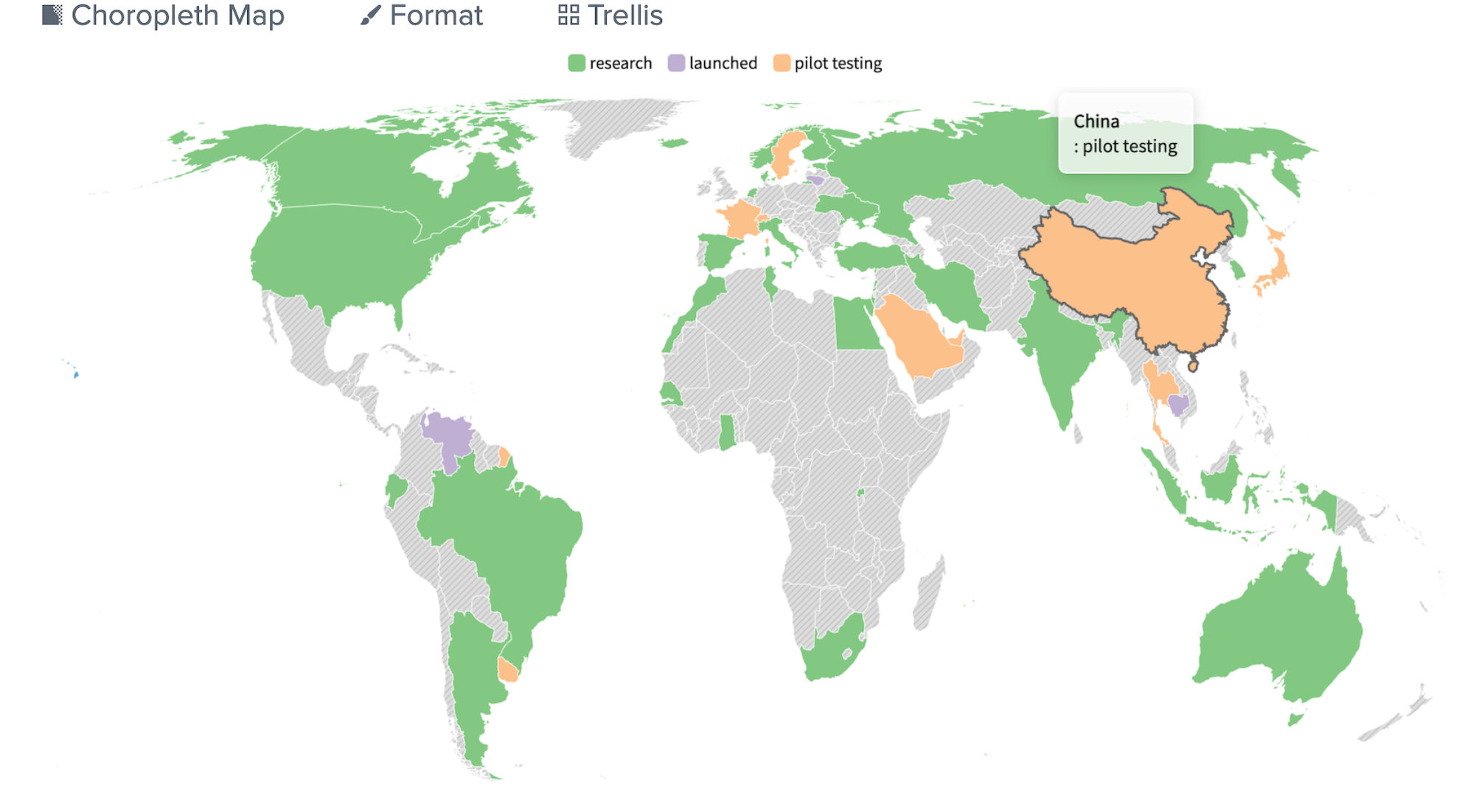 Digital Yuan has been given the same legal status as the physical currency. The government decreed that all the merchants who accept digital payments must accept DCEP.

China started the work on its CBDC project in 2014, when Xiaochuan Zhou, then the governor of the People’s Bank of China, established the Digital Currency Research Institute. In 2020, PBoC started pilot tests in a number of provinces.

At the 2020 G20 summit, China’s leader Xi Jinping mentioned the global need “to discuss developing the standards and principles for central bank digital currencies with an open and accommodating attitude, and properly handle all types of risks and challenges while pushing collectively for the development of the international monetary system.”

The October 2020 bill gave the government an exclusive right to issue yuan-pegged stablecoins and criminalized similar activity held by any other non-government institution. If violated, the law imposes fines up to five times the amount of the tokens created and the seizure of the tokens and any profits that their release has produced. The government opened the bill for comments on October 23, 2020.

The bill fits the bigger narrative. According to the documents from the Fifth Plenum Communique, one of the main goals for the upcoming five-year plan is to accelerate the development of the digital economy in general and to advance the research and development of digital currencies in particular.

China has also been clearing the playing field from potential competitors to the CBDC ecosystem, prohibiting local cryptocurrency exchanges, banning ICOs, blocking foreign websites related to cryptocurrency and ICOs, driving node validators (miners) out to other countries with new regulatory burdens, and arresting Chinese nationals linked to crypto custody businesses. These actions not only increase volatility of other cryptocurrencies, but also affect the general population’s perception of them by introducing so-called FUD (fear, uncertainty, and doubt) into the market. For example, a spike of fraud- and security-related messages in the crypto community was detected for almost a week after the news of the Chinese crypto-executive arrest spread over the mainstream media.

China’s Digital Currency Electronic Payment (DCEP), also known as Digital Yuan, e-CNY, and Digital RMB, is designed to replace cash in circulation. The People’s Bank of China is responsible for the token issuance.

According to the local media report, China Merchants Bank and Hong Kong-based China CITIC Bank joined the system and are in the process of introducing their digital wallets.

Digital Yuan will also be distributed to local fintech companies like Tencent and Alibaba to be used in WeChat Pay and AliPay mobile payment systems, respectively. During the initial stage of pilot testing, Digital Yuan was distributed via multiple lottery airdrops directly into users’ digital wallets. In February 2021, Beijing alone accounted for $1.5M worth of Digital Yuan handed out as a part of the Lunar New Year pilot project. 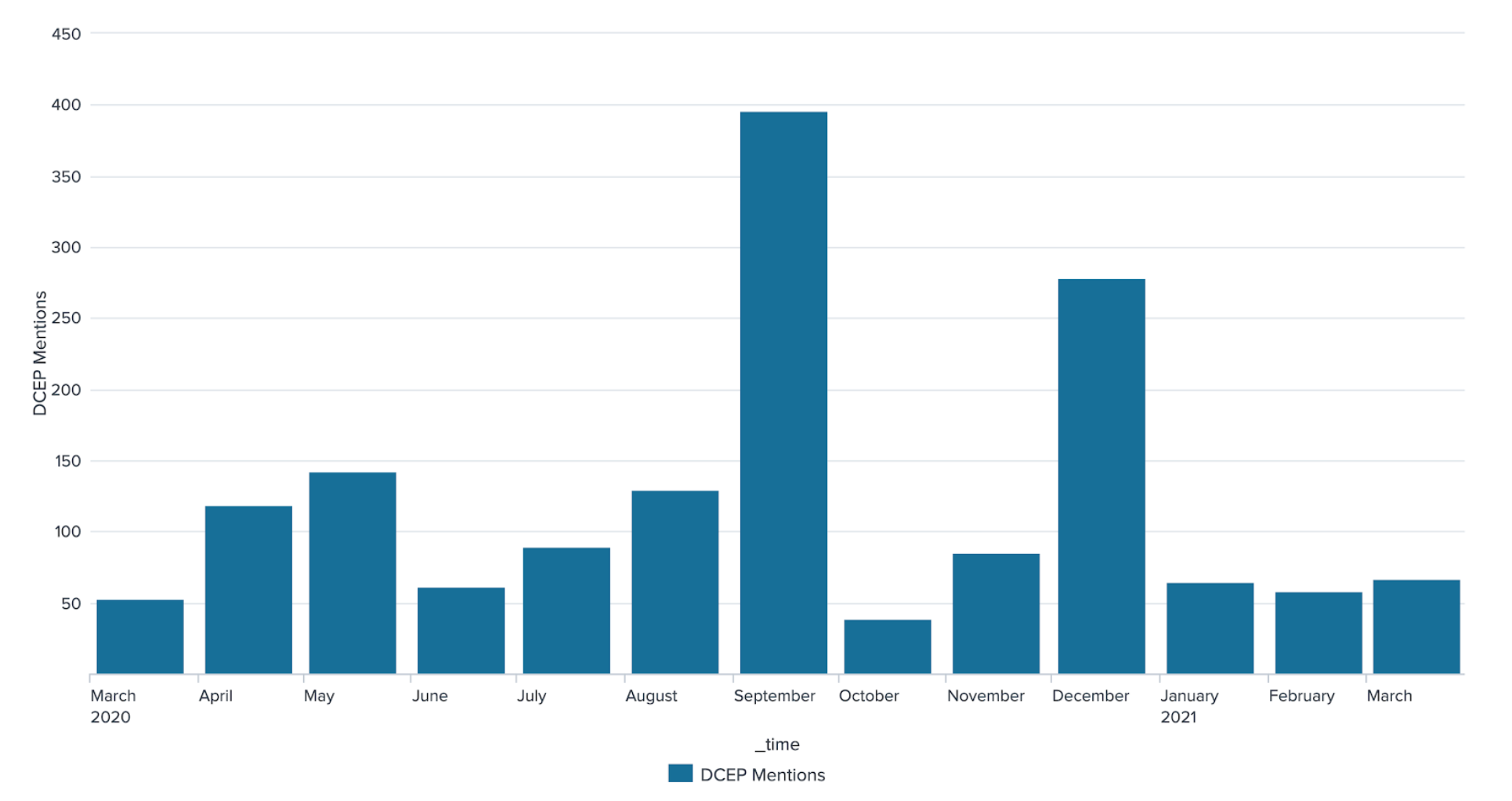 The Chinese government chose the centralized CBDC architecture, allowing them to have full control over which transactions make it to the ledger and giving them the ability to deactivate wallets at any time. The People’s Bank of China has filed more than 80 patent applications on its CBDC. The pilot test started in 2020 in Shenzhen, Chengdu, Suzhou, and Xiongan provinces. More provinces — Shanghai, Hainan, Changsha, Qingdao, Dalian, and Xi’an — will join the pilot test in 2021.

Going beyond just technical issues of creating Digital Yuan, the government also focuses on building the infrastructure around its CBDC. The three organizations responsible for maintaining DCEP are:

The early inclusion of Chinese tech giants with experience in digital payment solutions, namely Tencent and Alibaba, provided the required technological expertise for the creation of CBDC wallets and a payment system. As of February 2021, MYbank and WeBank, backed by Ant Group and Tencent, respectively, are also joining the pilot test alongside the eight major Chinese state-owned commercial banks. Their wallets will be added to the People’s Bank of China’s Digital Yuan app, which can be used to pay for goods and services. International companies like Starbucks, McDonald’s, and Subway are also participating in the pilot testing along with local businesses.

In November 2020, there had already been approximately $300M worth of digital currency spent in about 4 million transactions. At the beginning of 2021, China rolled out the ATMs to convert cash to and from digital tokens and even biometric hardware wallets. The Agricultural Bank of China launched a pilot ATM project to enable citizens of Shenzhen to convert cash to and from Digital Yuan. The bank has also rolled out accompanying hardware wallets, contactless cards, and wearables.

Digital Yuan can be downloaded into users’ wallets from the bank accounts of the eight state-owned banks (China Construction Bank, the Agricultural Bank of China, the Bank of China, the Industrial and Commercial Bank of China, Bank of Communications, Postal Savings Bank of China, China Merchants Bank, and Hong Kong-based China CITIC Bank). Other banks in the country are also working on apps for the People’s Bank’s digital currency initiative.