Bitcoin recently experienced its third block reward halving (an event also referred to as “the halvening”). A process through which the amount of newly minted bitcoin that is paid to miners from the coinbase is reduced. It only happens every 210,000 blocks. Each bitcoin block takes roughly 10 minutes to mine, so this event only occurs every 4 years.

The coinbase transaction contained within block 629,999 (the last block to receive a mining subsidy of 12.5 BTC) contained the following message:

As Colin Harper points out, this is note reminds us of the note Satoshi Nakamoto included in the genesis block:

The interest in the block subsidy change can be seen through a spike in crypto-media events containing the word “halving” around the time which it occurred. Most of these events have a neutral sentiment, and also mention “Bitcoin” in them.

A similar spike in Google searches for the term “bitcoin halving” is observed:

We also saw a general spike in bitcoin mentions. This can be viewed on Bitinfocharts through the number of #bitcoin tweets per day:

A reaction in mining times is also visible in the days following the halving. Here all Bitcoin blocks mined between May 9th, 2020 and May 15th, 2020 are indexed in Splunk. The time between each block is calculated and plotted on the y-axis, with the block height plotted on the x-axis: 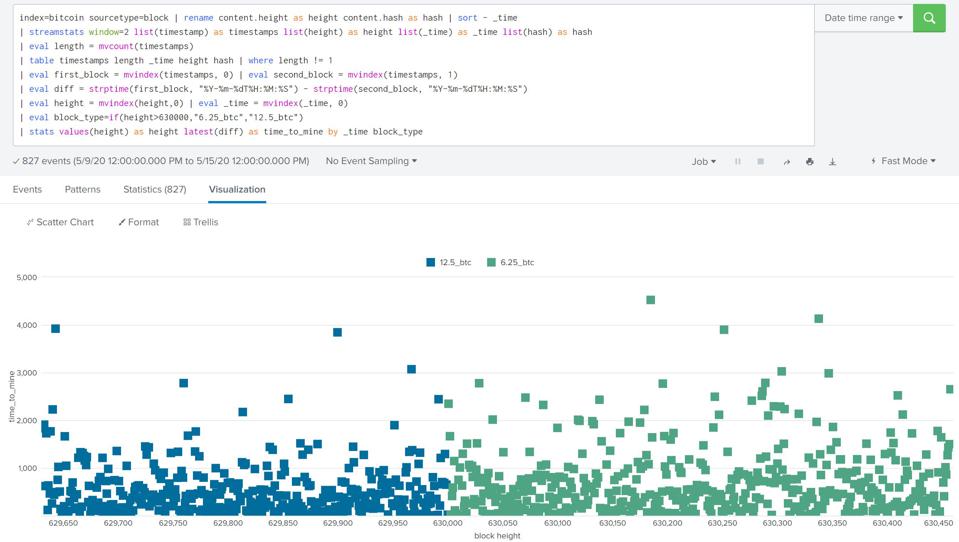 By calculating the 1 hour average of these block mining times, slight spikes can be seen:

This increase in mining time could be credited to the network’s hashrate changing as unprofitable mining equipment is shut off, and is nothing that would suggest major instability in the network. Bitcoin continued to rally in relation to the US dollar following the event: 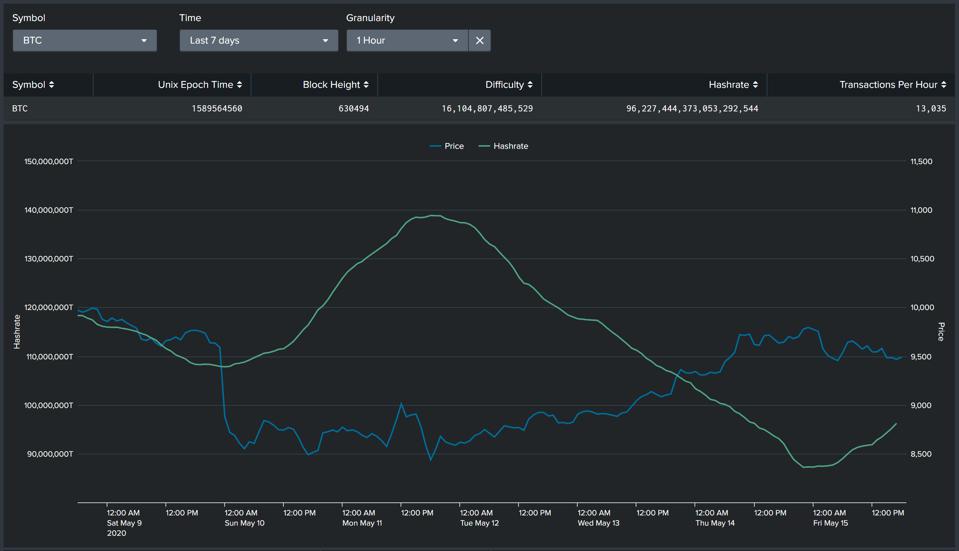 Based on these factors, it appears the network is stable, though the event itself seems to drive interest and discussion around bitcoin.

The current state of the global financial system brings up many of the same concerns that were being felt at the time of bitcoin’s inception, and highlights the value proposition of an open, permission-less, decentralized money.